Of course the landscaping project could not go ahead in the Spring of 2020 being just another casualty of the Pandemic! However the extra funding needed for it now seems to be available and a Project Officer has been appointed to initiate and oversee the work. The Friends are as ever hopeful that work on it may start later in 2022 so that the Master’s House can be seen in the enhanced setting that it deserves.

The much awaited scheme for landscaping around the Master’s House which can be accessed on Herefordshire Council’s website (outlined in Planning Application P150041/F) is still set for delivery but unfortunately further funding is having to be sought as all the tenders came in over budget. It is hoped that the Council will agree the increased funding when the matter is discussed at the end of February so that work can start this Spring 2020.

Local artisan blacksmith Stephen McRae is in the process of creating a large sculpture to be placed in the garden area of The Master’s House. Originally conceived as a memorial to the upheaval and loss experienced during the First World War, the sculpture was intended to be part of the landscaping project referred to above. Unfortunately, that landscaping work has yet to begin. For this and other reasons the theme of the sculpture has been refocused to encompass the more general idea of “Memories”.

Stephen is very keen to complete the work, an impressive collection of exquisitely worked metal suitcases with beautiful leather and stitching effects. When finished, each suitcase will have a label with a significant message attached to it. Ideas so far include references to World Wars I and II, the experience of evacuees, and more recent peacetime events such as holidays. One suggestion was for a label requesting the reader to “Please look after this bear”!

If all goes well the sculpture should be ready to unveil on the 08 May (the date of the early May Day Bank Holiday rearranged to coincide with the Victory in Europe celebrations). The first Image shows the suitcases laid out on the ground while the second shows them stacked on top of each other to give a clearer idea of what the finished work will look like. Both show Stephen’s excellent blacksmithing skills and craftsmanship. 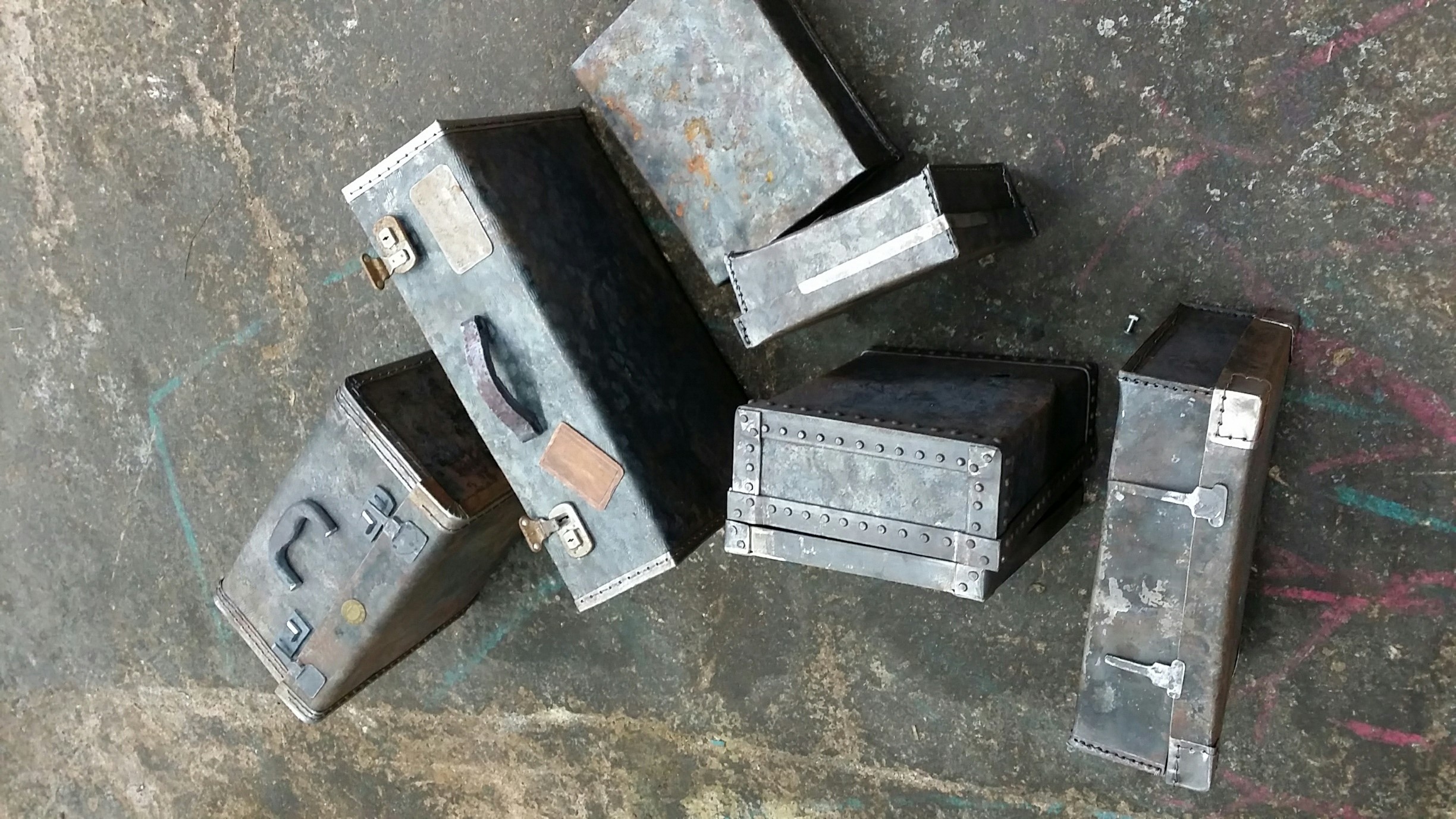 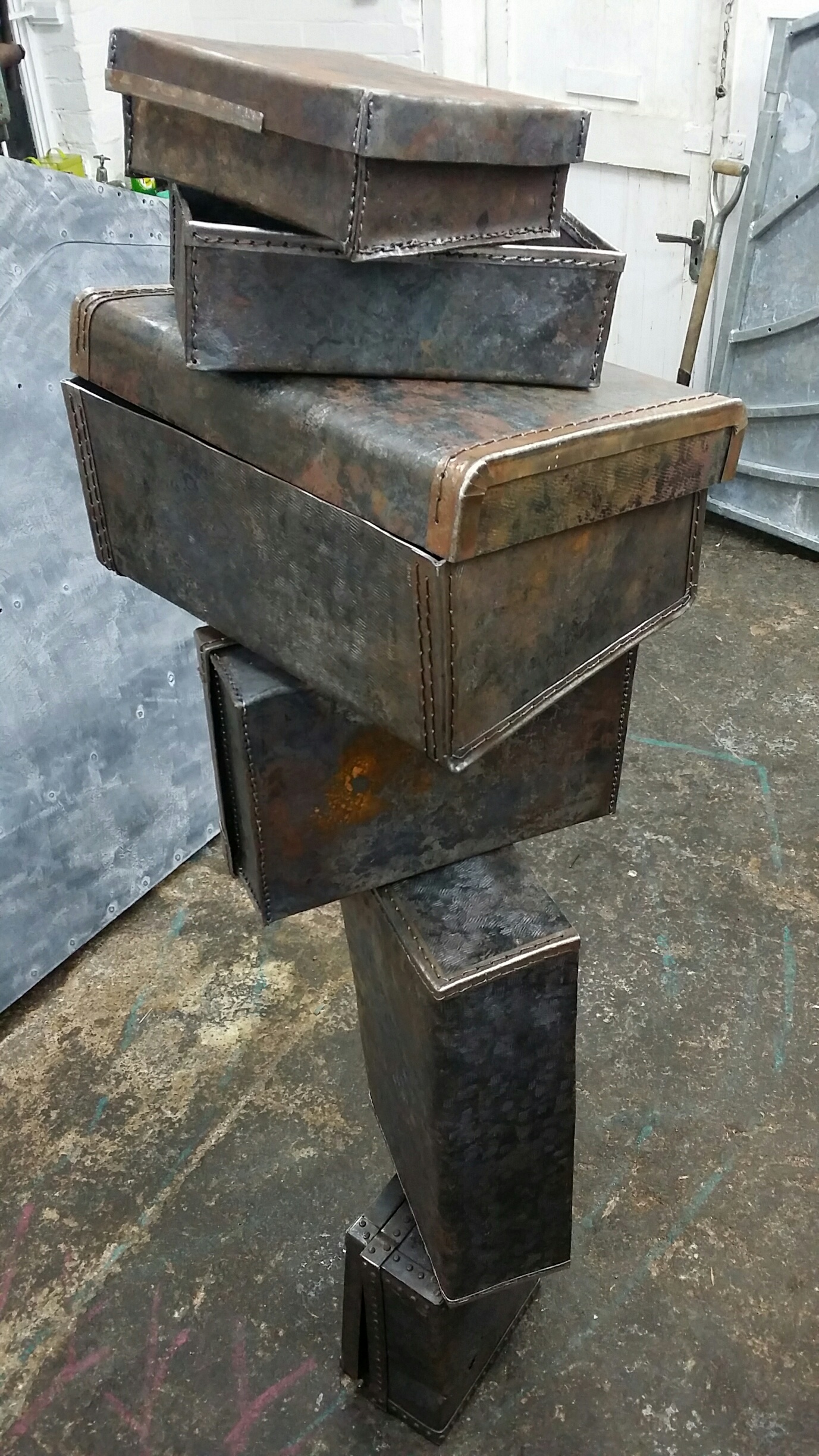 In her book ‘Found Voices’ the Poet Sara-Jane Arbury invites us on a tour of some of Ledbury’s finest heritage sites. Her collection of poetry was inspired by eight sites (including the Master’s House) using words found within the buildings themselves and from First World War poetry.

This book offers a contemplative companion to information guides about the buildings, celebrates Ledbury’s heritage and commemorates the centenary of the First World War.

A downloadable version of ‘Found Voices’ can be found here 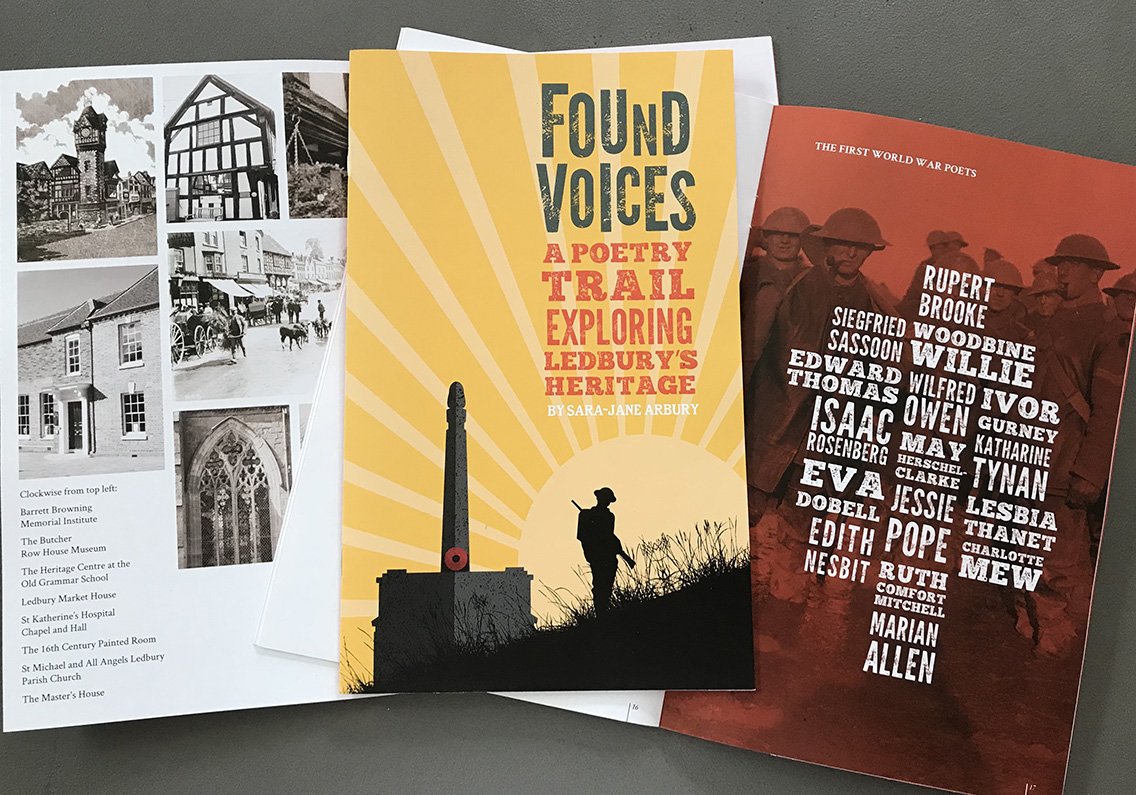 Our second very successful promenade play, which took place between 11th and 21st October 2018, was also our second very successful collaboration with Ledbury Amateur Dramatic Society. The first play; ‘The Visit’ performed last year, focused on the medieval era of Master Edward Cowper. ‘Between the Lines’ in contrast brought us face to face with the realities of the home front in 1916 during World War I.

Master Arthur Bannister joined the community in Ledbury with his wife Alice, in 1909. They lived mainly in Cathedral Close, Hereford but for a few months of each year came to live in the Master’s House. Ledbury’s community regularly held fund raising events for the war effort during this time often in the Master’s House. The play covered one such event and highlighted the deprivations, hardships and anguish suffered by the local population in Ledbury and indeed in rural market towns throughout the Country. A fact that is little mentioned and often forgotton in the histories of World War I.

In juxtaposition to this theme and incorporated into it was an excellent film produced by the young people from the Barratt Browning Youth Group in Ledbury showing life at the Front during the war.  Working with Joined Up Heritage Ledbury they engaged in heritage in an unconventional way by exploring the ‘Between the Lines’ characters and script and developing their film skills. (See below for more information about Joined Up Heritage Ledbury, a Heritage Lottery funded project.) 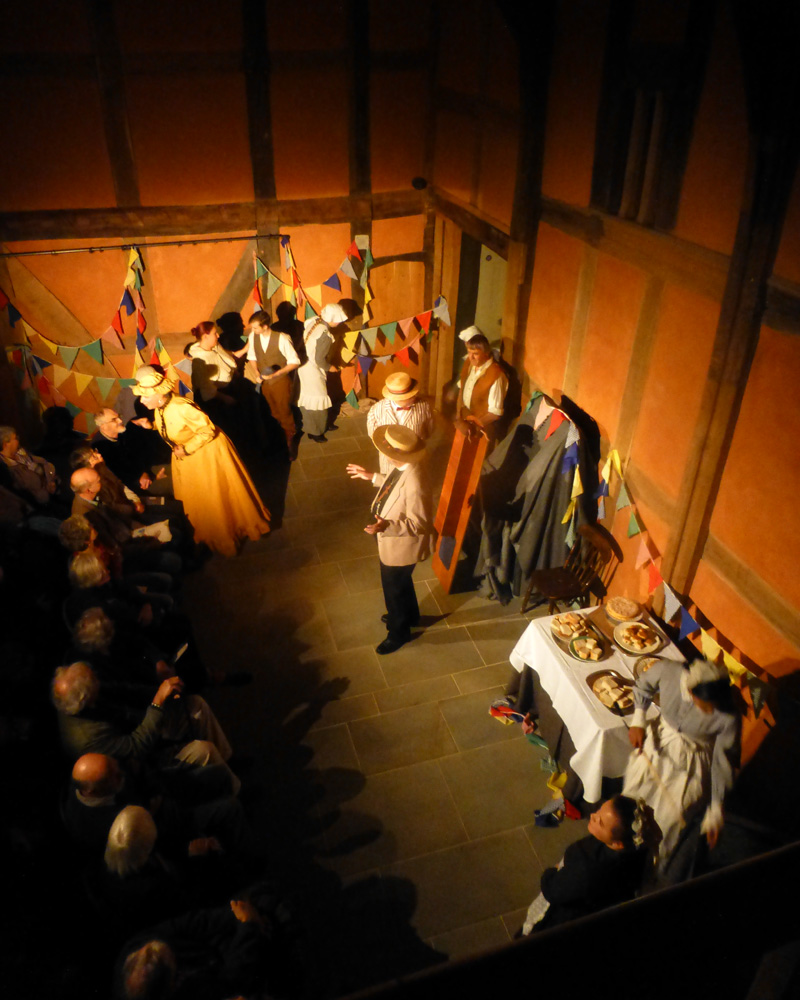 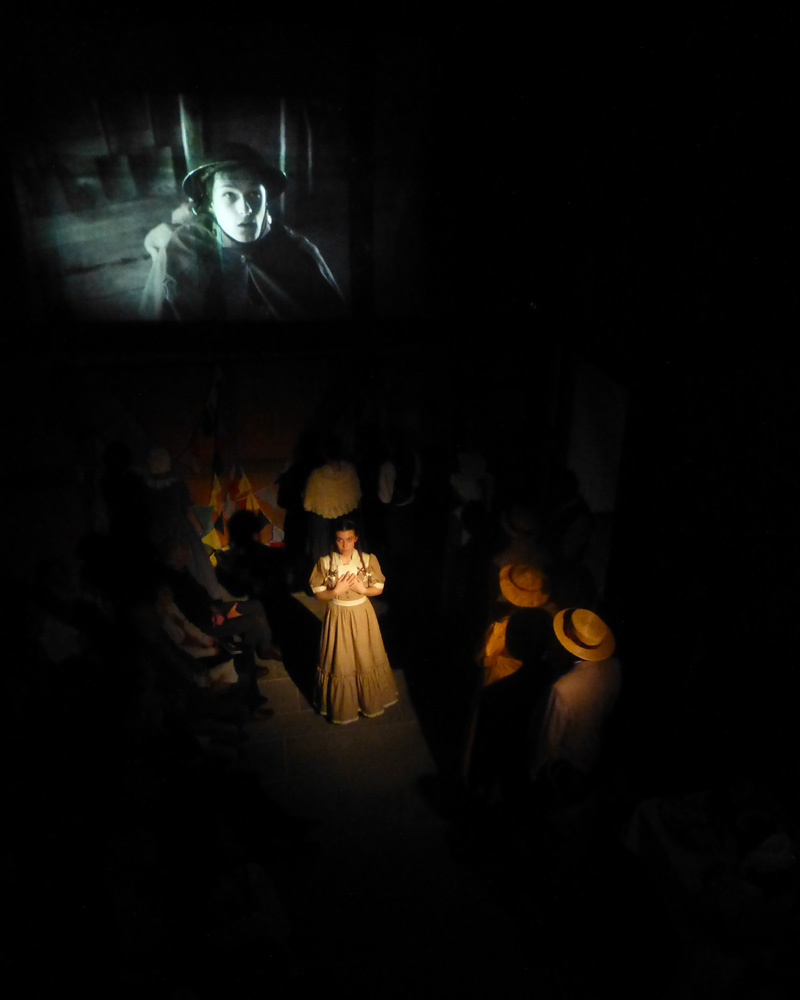 Ledbury is a unique and very special town. Its rich heritage and diverse high street is celebrated widely, attracting visitors from all over the world. The Market House, Barrett Browning Memorial Institute, The Master’s House, St Katherine’s Chapel, the Alms Houses, the Painted Room, the Butchers Row House, St Michaels Parish Church and the Heritage Centre all lie at the heart of this beautiful market town. Joined Up Heritage was a project that was designed to bring together the volunteers who support this unique collection of buildings. Over the two years of the project until Spring 2019 when it ended, skills and expertise were shared and the community and visitors alike were engaged in special events that explored and celebrated Ledbury’s heritage.

The Master’s House with its wonderful restoration was one of the buildings included in Channel 4’s ‘Great British Buildings’ and appeared in the third episode of the series which concentrated on 13th to 16th century restorations and was shown alongside Hampton Court Palace and The Royal Hospital Chelsea. It had been sifted from the longlist of the UK’s outstanding restorations of historic buildings for the Royal Institution of Chartered Surveyors’ Restoration of the Year award.

Since the completion of its restoration in March 2015 the Master’s House has become a real centre for cultural, heritage and community activities with a wide programme of events taking place throughout the year. With over 100,000 users and visitors in each of the first two years, the Master’s House offers a modern, accessible library in a beautiful heritage building.

All this has been made possible by the £1,174,200 received from the Heritage Lottery Fund, the £3,000,000 that Herefordshire Council invested in the restoration and the support of volunteers from the Friends and the Ledbury Library Development Group as well as the wider community.